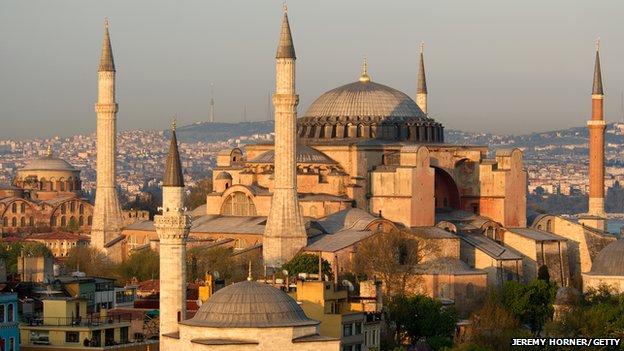 The interpretation of devshirme by modern historians has compromised the historiography of this Ottoman institution because of the imposition of modern values on medieval people. Devshirme is a Turkish term translated the 'levy of boys' describing a draft of Christian boys who were enslaved for service to the sultan in his palace and to field his "new corps", the janissaries.

For centuries, government agents would come to Christian villages and with the help of the priest and church birth records, they would select the best and brightest of the teenage boys. These boys were then dressed in the characteristic red janissary uniforms and marched away in cohorts to Constantinople where they were stripped, circumcised and selected for further training or sent to Turkish farms for hard labor to toughen them for military service when they were older. Some of the boys taken did rise through the ranks to become the rulers of Ottoman society replacing the Turkish elite. Christian shepherd boys became head eunuchs, vezirs and military generals.

The Ottoman armies had originally been composed of Turks, volunteers and prisoners of war until the rapid expansion of the fifteenth century. After the Battle of Ankara in 1402, the government passed the Janissary Law to conscript non-Muslim youth to form a new military force, the janissaries which means "new corps".5 The initial law only recruited children at intervals of every five years which symbolized the sultan's one fifth share of the booty from conquest, but eventually the Ottomans increased these 'blood taxes' to every four years, three, two and sometimes yearly on the Christian population. (Jews, gypsies and some Christian cities were exempt.)

STRUCTURE AND REGULATIONS
The system of devshirme was introduced under sultan Murad 2 in the 1420's and was a result of the military needs of the fast growing empire: it needed loyal army troops in high numbers, as well as reliable civil servants in the palace and in the administration.
The system was designed so as not to develop any hereditary aristocracy which could threaten the position of the sultan and his family. Hence, only non-Muslims could enter the devshirme. And even if a member of the devshirme could marry after he finished his training and left the palace, his sons were Muslims and could not enter the devshirme. That was the way it was intended to be, but towards the end of the 16th century the devshirme class instigated changes.
It was at all times clear that devshirme was contradictory to Muslim law, Shari'a. Shari'a had clear instructions to the Muslim ruler to protect and take care of all Christian subjects. But the needs of the empire, as well as tribal traditions, made the rulers instigate the practice. There were numerous protests at the beginning from Muslim scholars.
Slaves to the palace and the administration of the Ottoman Empire were allowed as war booty. Women for the harem often came through this channel. Later on, slaves were bought as well and even among these, some climbed to the highest positions in society. The best example of this was Mehmet Hosrev Pasha, who became grand vizier in 1839.
From the 15th until the 17th century, between 200,000 and 300,000 boys were taken out to devshirme.

COLLECTION OF MALES
The "taxation" was performed in the Balkan countryside. At certain times, normally every 4th year, some of the young minor boys from each community were to be given to the sultan. Their age was normally between 8 and 10, but it could at times be as high as 20. And the number of boys given to the sultan as part of devshirme was between every 10th and 14th.

The devshirme collection was performed by a higher Janissary officer (who typically would themselves be of devshirme origin) who travelled from kaza (the small administrative regions in the empire) to kaza together with a secretary and soldiers.

The boys collected through devshirme, were called either kul, ghilman or oglan. The boys were divided into 2 groups. The best fit were sent to one of the sultan's palaces. The other ones were sent to Turkish farmer and soldier families around Anatolia, but also to families in Rumelia (approx. modern Romania). Their training took 3 to 7 years and during this time the boys learned Turkish and Ottoman lifestyles.

FORMAL TRAINING
After this first training period, the boys were called acemi oglanlar, "foreign boys," even though they had been "osmanized". They were now sent to the capital, where they worked in one of the sultan's gardens or the shipyard.Some of the acemi oglanlar were picked out to serve in the palace. Here they embarked on a long education, normally extending beyond 14 years. This educational system, called palace school, would last until the middle of the 19th century and be the main source for higher officials, administrators and leaders in the Ottoman Empire. The young men at the palace school could under no circumstances leave the palace or be in touch with the outside world.

Their training was diverse, ranging from demanding physical training to theoretical training. Languages were important, they had to learn Turkish, Persian a the great cultural language of its time and Arabic. Writing was another important subject and they were given training to become experts in different forms of Arabic calligraphy (at this time, Turkish was written with Arabic letters). Other important subjects were literature, theology (the Koran and the hadiths) and law (Shari'a, or Seriat as it was called in Turkish).

CAREERS
Normally around the age of 20, the boys were distributed between different Janissary corps. This was defined as release, but the freedom granted to the young men was only one in which they no longer could be sold or given away. They were still called kul.

Most of the men from the palace school would not stay in the palace. Many of them became land-owning sipahi, which meant that they became part of the cavalry. The highest rank of which any of these could dream was to become an officer.

But the ones who remained in the palace had better career possibilities. A number of them were appointed sancakbeyi, governors in smaller provinces and they could rise to become beylerbeyi, governor in one of the 31 larger provinces into which the empire was divided. The highest rank, for the few who succeeded, was to become vizier and finally grand vizier.

Already under the 2 reigning periods of sultan Mehmed 2 (beginning 1444, ending 1481), the devshirme was used even for the highest administrative positions in the society. All his grand viziers were devshirme.

However attractive such a career might appear, there were high risks attending it. Simply because these officials were not free men, the sultan didn't have to put them in front of a court if he wanted to punish or execute any of them.

DECLINE OF THE DEVISHIRME SYSTEM
From the beginning of the 17th century, the devshirme system started to disintegrate. As only slaves were allowed to get the highest positions in the Ottoman state and the sons of these officials were free Muslims, who could not assume a role of leadership, a change was bound to be called for from the slaves themselves. The outcome was that free Muslims were admitted to the administration in a way similar to what was common in most other countries at the time. But slavery was still a part of the system.
Despite the changes, the system didn't develop into office-holder dynasties. The only exception was the Kaprulu family which had a number of grand viziers in the late 17th and early 18th centuries.

As the devshirme system came to an end in the 17th century, but not the slave system itself, slaves slaves continued to be purchased in addition to the many who were war booty. All in all, it is reasonable to say that the devshirme had functioned according to its intentions. While European states suffered from officials getting their positions because of their family background a kind of nepotism, the devshirme allowed the sultan to pick the best fit. And even if corruption became a problem, it was probably never any worse than what was true in the Western states.

DEVISHIRME - A CRUEL SYSTEM?
When reading about the devshirme system, it is important to remember that this happened in settings quite different from those in the present. For many reasons, it may not have been possible to protect human rights in the same way as is expected today.

It is also important to remember that even if there were no direct parallel to the devshirme system in European states, it cannot be concluded that life was much better there. As a matter of fact, in times of war, European states showed little consideration when they drafted for war service.

Being the "slave" of the sultan was considered to be an honour and these slaves filled the most prestigious positions in society. The whole point of devshirme was not to suppress the individuals who became slaves, but to secure loyal servants.

Very often, becoming the sultan's slave was the fastest way out of poverty for young boys in the countryside. There are many reports of Muslim families bribing the Christians to let their sons be selected through devshirme.

There were, however, brutal elements among the devshirme officials. As mentioned, they could be punished and even executed without trial. And in almost all cases, they lost contact with their families.