(3.4k points):
0 Helpful
0 Unhelpful
In a Nutshell:
After successful unification of Arabian tribes under Islam, Muslims have faced two threats: the Byzantines to the West and the Persians to the East. Both had technological advantages over the Muslims: Romans with elite armoured units, Persians with war elephants and several sophisticated army divisions, each with over 100,000 well equipped elite soldiers. To counter the numerical superiority of their armies, Muslims with there sacrificial nature and stronger will power were able to demoralise their infantries and also with impeccable mobility, accustomed to swift movement and hardship in the field, they have outclassed their heavily equipped attacks and movements.

The Muslims of Arabian Peninsula were immersed in the depths of darkness in the period of ignorance in Pre-Islamic era; from some Arab tribes which were burying their daughters alive, tribalistic warfare over petty issues, constant fighting amongst themselves which continues till generations, ultimately being disunited with each other. Out of that darkness came a new light. Prophet Muhammad was born in a time of Ignorance in Arabia. Prophet Muhammad has successfully abolished the tribal hierarchy by uniting people under God and His Messenger.

The Muslims also feared that the rise of Islam would catch the attention of the Romans and the Persians, who presumably had the power to crush any newly-established power in the Arabian peninsula. After the unification of Arabia under Islam, now it has threatened the hegemony of the Persian and Roman Empires. Both powers were also in constant warfare with each other for centuries especially the Byzantine-Sasanian War of 602-628 has exhausted both empires.

In the early 7th century, the two most powerful empires at the time were the Byzantine and Persian Empires. In the years 613 - 614 C.E the two Empires went to war, with the Byzantines suffering a severe defeat at the hands of the Persians. Damascus and Jerusalem both fell to the Persian Empire. The Romans, in the Holy Quran, it is stated that the Byzantines had met with a great defeat but would soon gain victory.

These prophecies, above, were revealed around 620 C.E, almost 7 years after the severe defeat of the Christian Byzantines at the hands of the idolater Persians in 613 – 614 C.E, that the Byzantines would shortly be victorious. In fact, Byzantine had been so heavily defeated that it seemed impossible for the Empire to even maintain its very existence, let alone be victorious again.

Around 7 years after the revelation of the first verses of The Romans, in December, 627 C.E, a decisive battle between The Byzantine Empire and the Persian Empire was fought in the area around the Dead Sea, and this time it was the Byzantine army which surprisingly defeated the Persians. A few months later, the Persians had to make an agreement with the Byzantines which obliged them to return the territories they had taken from them. So, in the end, the victory of the Romans proclaimed by God in the Quran miraculously came through.

"The Romans have been defeated in the lowest land, but after their defeat they will soon be victorious. Within three to nine years. The decision of the matter, before and after, is with God." (Quran 30:2-4)

The constant warfare between both empires has led to instability throughout the regions and at the same time, a new emerging foe is awaiting in the south.

Muslim Victories against Romans and Persians, has constantly being teased in both the Quran and Hadith. These prophecies were revealed at the time when Muslims were weak politically and polytheists used to mock Muslims on how can these Bedouins defeat the world superpowers of that time.

Imam at-Tabari (rh) reports in his 'Tarikh' that Sahabi Abdullah Ibn Mas'ud (ra) said when the ayah "This is nothing but a reminder to the 'alamin " [ 68: 52] was revealed they knew then, even though they were a small handful of Muslims at that time, that Islam would come to dominate the world! Even the mushrikin(polytehist) knew the vision they had, so they mocked the early handful of Sahaba (ra), "Here are the masters of the Earth who will defeat Chosroes (of Persia) and Caesar (of Rome)" [Raheeq al Makhtoom].

There are Numerous reports on the prophecy of Conquering Rome and the Persian Empire. 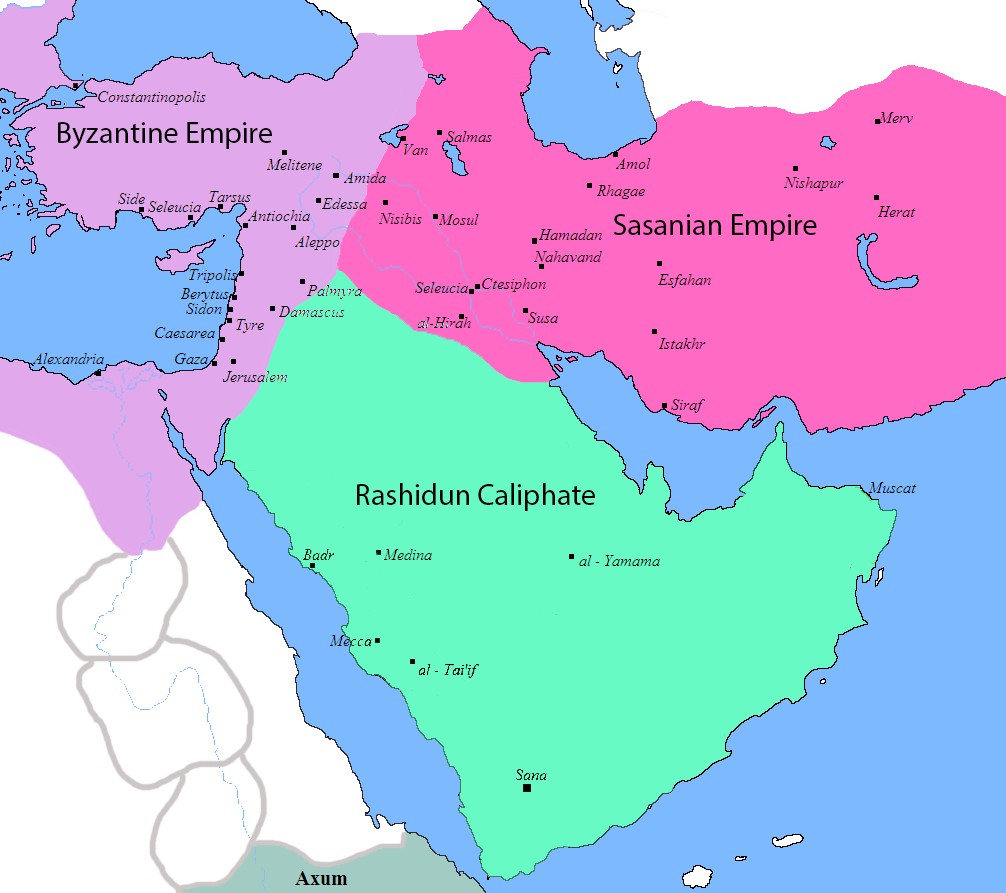 The Arab force could best be described as 'irregular' and with cavalry having high mobility. The Persians and Romans, with a larger and better-equipped army, were overconfident, with a sense of superiority over the tribal Arab Bedouins.

In 610, the Arabs worshipped stone idols, fragmented into a thousand competing tribes and seen as sub-humans by the Persians and Byzantines. Within a few decades, Muslim Arabs and non-Arabs unified under Islam, united the Arabian peninsula and defeated the Persian and Roman Empire and taken Iraq, Persia, Syria and Egypt.

Their advanced infantry and heavy cavalry attacks were stopped by the Arabs who were highly mobile nomads and fielded an army of light cavalry. And so the larger army, surrounded by a smaller with high morale and psychological warfare tactics, which resulted in the defeat of the army, which was 20 times bigger than of there own. The Persians and Romans cavalries would get a large chunk of food and luxury which hinders their movement whereas Arabs were quite simpleton, they use camel instead of horse or elephants. Due to their experience with the desert, they can hold their hunger and urge to thirst for a quite longer time and they could also survive on dates only in the time of calamities.

In a secular way, the Arabs had some of the finest commanders operating in the field while the Caliph at the time was very hands-on in his approach towards the conquest campaigns. Companions like Khalid bin Walid, Abu Ubaida bin Jarrah, Amr ibn Al-As, Yazeed bin Abu Sufyan, Saad bin Abi Waqqas, Nu'man ibn Muqarrin managed to lead their respective armies to victory over forces that were almost always larger than their own. While back in Medina, the Caliph Umar bin Khattab RA and Abu Bakr RA would direct campaigns to the smallest detail, constantly getting updates from the armies on the march and in the field.

Abu Ishaaq Al-Fazaaree {rahimahullaah} says:
The enemy was never able to stand up to the Companions of Allah's Messenger {Allah's blessings and peace be upon him}, so when the news of the defeat of the Romans came to Heraclius at Antioch he asked [his people], "Woe to you, tell me about these people who fight you, are they not humans like you?" They replied, "Indeed, they are." He asked, "So are you more in number or them?" They replied, "We outnumber them greatly in all places." He said, "So how is it that you are defeated whenever you confront them?"

A senior and esteemed elder amongst them replied, "Because they stand in prayer at night, fast during the day, fulfill their agreements and promises, enjoin what is right and forbid what is evil, they are fair and just amongst themselves; and because we drink wine, fornicate, disobey, break our agreements, steal, oppress and do injustice, enjoin the committing of what angers God and forbid what pleases God, the Mighty and Majestic, and we cause evil and corruption in the land."

Heraclius said, "You are the one who has spoken the truth."

The divine back-end and the immense sacrificial nature of the companions have led the destruction of two mighty empires from which the Islamic Caliphate later expanded from sore of Portugal to Sindh(India).

The Muslims had several key advantages, including:

The unifying of various Arab tribes force emerged in Arabia, has instantly overcome the war-torn empires which are hollow and weak politically and socially. Islam has united the whole of Arabia and further extends it towards the non-Arabs. So the tribalist under the banner of Islam becomes a coherent and directed force onwards and conquered two superpowers of that time.

Gibbon, Edward.Decline and Fall of the Roman Empire

Peoples, Scott. The History of Persia Part I: Ancient Persia