He founded London's first masjid asking the Ottoman Caliph for funds for the work he was doing.

May it please your Excellency!

May I address the following lines to Your Excellency!
On the 17th of January this year I sent Your Excellency a document containing the works I have done and am still doing for the great and noble cause of Islam and for the prestige and honour of our most beloved Calipha, upon whom all good blessings flow!

I do herewith enclosed [sic] another document which conveys the same sense as the previous, and which together with the first document would never have been sent to the Seat of the Caliphate had not the expenses I incurred been very, very great during the last five years in London while agitating for the cause of the Calipha and the Ottoman Empire and through which agitation (this being and is still an absolute necessity) my ordinary occupation has been entirely neglected.

I, therefore, pray through the Grace of Almighty Allah, your Excellency will be so kind and generous as to lay this said document at the Foot of the Throne of His Most Gracious Majesty our beloved Calipha Al-Kazi Sultan Abdul Hamid Khan, the Victorious.

Would it be out of place were I to repeat that when in Constantinople last year (1897) I have had the pleasure and fortune to have been introduced to Your Excellency by His Excellency Marshall Reouf Pasha and that at the interview which took place I was kindly told to submit my document.
In the Salaat Travie [Tarawih] which I and the Congregation of the London Temporary Mosque are, of course, performing every evening during the Ramadan a Doa [du'a] is also made for your Excellency's good health, long life and prosperity.

May, through the grace of Allah, your Excellency continue rendering the good services for Islam which the Moslem World has always been benefited by! May your Excellency enjoy a happy and successful term of office!

May I, on behalf of the congregation of the Mosque, convey our best wishes to your Excellency for the coming Eid [al-]Fitr (Bairam). 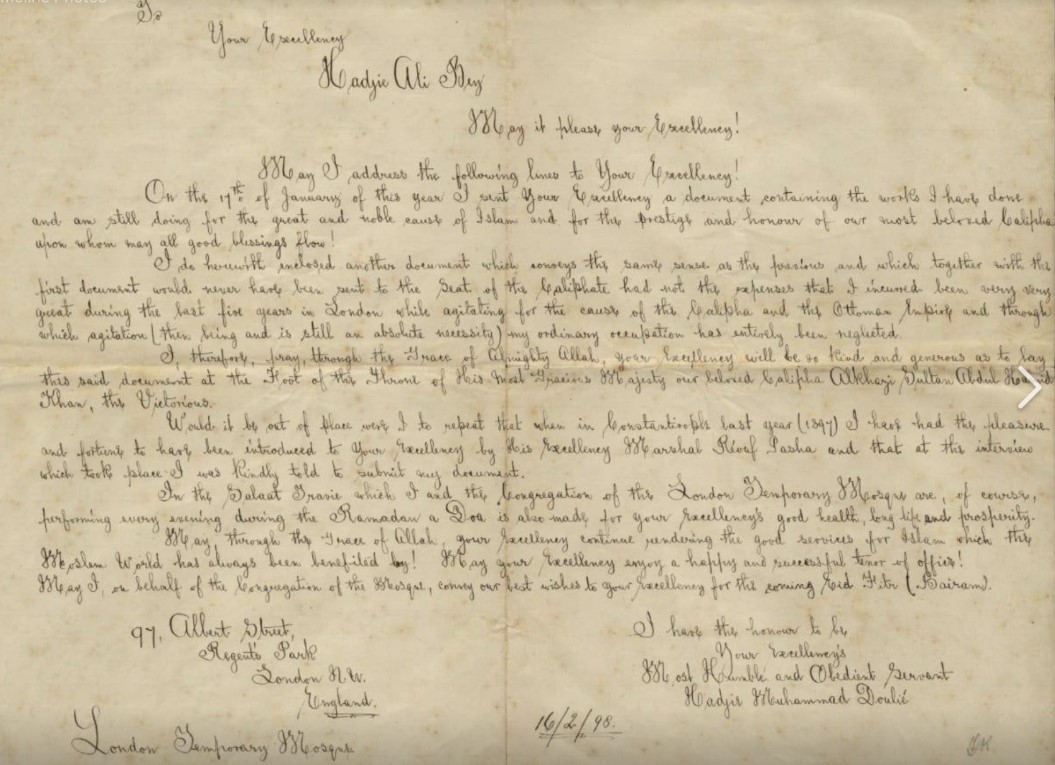