(60.9k points):
Islamic researcher, graduated from Al-Azhar University, Islamic Studies in the English language. I also studied at Temple University in the US.
2 Helpful
0 Unhelpful
In a Nutshell:
The Qur'an makes a number of historical, religious and cultural references. Reviewing all the places where the Qur'an was revealed or the Prophet (saw) visited fails to reveal any possible credible sources. It is implausible to attribute Qur'anic content to any human source - the content can only be sourced in something that is beyond human capability.

A number of critics argue the historical, religious and cultural references mentioned in the Qur'an were sourced in historical figures - whom the Prophet (saw) encountered and acquired and learned such information.

In this answer, I am going to consider the possible sources for such information, sources who may have been wherever the Prophet (saw) lived or travelled.

Muhammad ibn Abdullah was born in Mecca at the beginning of the 7th century CE. He was known by the local tribes as "the most truth-teller and trustworthy person" (al-Sadiq al-Ameen). He was generally unschooled, receiving the Qur'an from Allah at around the age of 40 outside Mecca.

Some people believed in his Message due to his good character, behaviour and personal relationships, such as Abu Bakr, Ali or Zaid, even sometimes without even seeing him, the people of Medina being examples.

He invited the Quraysh leadership to reorient their way of life to Islam, but they resisted his call. He approached over 40 tribes who also rejected him before the Medinan tribal leadership accepted him and invited him to migrate to Medina where he became the leader of the first Islamic polity.

Who is the Author?

Two issues are important when considering this matter.

Firstly, Muhammad (saw) lived or was at only four places; in Bani Sa'idah, the tribe where his wet nurse lived till the age of 4; in Mecca where he was raised and lived until the age of 53; two trade journeys to Syria, for a few months, one with his uncle at the age of 12 and another at the age of 25 for Khadija's commercial caravans; and in Medina whilst he was around 53-63 of age.

The Qur'an was revealed in portions over the course of the Prophet's life. Thus either the author of the Qur'an is a well-informed and widely read scholar or a scholar accompanied him throughout his life. The latter is implausible because of the fact that he received revelations in places where no one could accompany him except his young wife Aisha. He (saw) said:

"Do not hurt me regarding Aisha, as the Divine Inspirations do not come to me on the beds except that of Aisha." (Sahih al-Bukhari 2581)

Given Muhammad (saw) was unschooled, whereby even his enemies did not accuse him as a source, he could not be the source of Qur'anic references.

Mecca was thousands of kilometres away from any civilization. Most of its population were unschooled and illiterate. When Meccans searched for the source of the content of the Qur'an, they found two possible sources: Waraqa bin Nawfal and a blacksmith Roman slave. But Muhammad (saw) could not have learned anything from them as the latter was unqualified and the former died a few days after the initiation of the revelation.

Tom Holland, a radical sceptic and orientalist, elaborates on the importance this issue saying,

"The key factor about the traditional account is that Muhammad receives his first revelation in Mecca, and Mecca stands at a fabulous remove from the World of the Roman Empire. … There were no Jews and no Christian in Mecca. … Muhammad was illiterate …if that is the case, … so how to explain this text which full of those sophisticated cultural references except by a miracle. It seems if we are to rely on the Muslim account of how the Quran came into being that The Divine must indeed have penetrated this Miracle." (The Origin of Islam, a YouTube video at Rancho Mirage)

For this reason, orientalists try to impose a new history as to of the origin of Islam, a religion first appearing in Rome, not in the Arabian desert, as they could not find any possible sources there.

A Source During His Travels

Muhammad (saw) travelled two times; the first travel when he was accompanied by his uncle at the age of 12 to Syria 582 CE from the purpose of trade. The importance of this trade for Islam critics is he was hosted for lunch by a Christian monk Buḥayra ar-Rahib. His residence was on the main route to Syria and he was familiar with the passing caravans. He found a child called Muhammad, he searched for signs of prophethood (the seal of prophethood) mentioned in the Bible that he eventually recognised. Finally, Buḥayra told Abu Talib his nephew would be a great prophet later so try to protect him and he advised him to send him back to Mecca and don't let him arrive Syria because the Jews would kill him as they did towards the rest of the Prophets (as). Abu Talib took the advice of this wise old monk and sent Muhammad back with some of the guides and other narrations claim he went to Syria for a few days and then was sent back to Mecca. (Seerat Ibn Hisham, pp. 10-12)

Whilst some scholars believe this story is not authentic (al-Dhahabi and others), we can assume for the discussion as if it was a sound story.

Although orientalists always adhere to claim this monk much have taught him during this male, this accusation is still unproven and implausible for some reasons: There is no reliable historical reference states that Prophet Muhammad (saw) studied under him; their meeting lasted only for a few hours; the Prophet (saw) was still a very young child; the monk was the questioner and the Prophet (saw) was the answerer, not vice versa; the content of the Qur'an is much more complicated to be studied in this meeting and it also requires a full-time company which is not available for the case Buḥayra; many of his tribe attended the meeting so they should have learned the same knowledge he is supposed to be received and no one of them later, after becoming enemies, accused him with studying under Buḥayra.

The second travel happened later when he was 25 year-olds. He led a commercial caravan to Syria for Lady Khadijah (before they get married). This journey lasted for a few months (most of them during the route back and forth). Historians agree that Prophet Muhammad (saw) didn't meet any scholar, nor had time for that as the head of the campaign. He sold his goods and bought others and went back as fast as possible. Thus Islam critics generally don't cite this story to justify the historical content of the Qur'an because it does not really prove anything.

Hence, he had no teacher either from his tribe, nor from the surrounding area, nor from his two short period travels.

Jews and Christians in Medina

The Prophet migrated to Medina after 13 years from the initiation of the Revelation. In Medina, he was surrounded by Jewish and Christian tribes and some of them followed his Message. Some Muslim critics argue the Prophet (saw) lived there for 10 years (until his death), so he must have learned the historical references from his Jewish and Christian followers.

But the Prophet (saw) could not have learned from them for the following reasons:

"whoever appreciate the sanctity of History and believed in its events know Prophet Muhammad had no human teacher … For those who claim Muhammad was taught by a Human being, please tell us his name, who saw or narrate this reference? What kind of knowledge did he hear? When did it happen and where? … Was Muhammad born in Mars? Or was he raised in a world other than ours?" (Dirazz, an-Naba' al-'Adhim, p. 63)

This possibility can't stand when we read the first line in the Qur'an:

"I seek the refuge of Allah against the cursed Devil."

How can the devil curse himself and urge people to curse him?

When we also look at the description of the Devil in the Qur'an we can absolutely say it is not from the Devil. Allah says:

The kind of teaching in the Qur'an contradicts the usual teaching of devils who teach polytheism, impurity, wrongdoing, immorality and others which the Qur'an absolutely condemns.

Did Western Scholarship solve the Problem?

Professor David Thomas, an emeritus Professor of Christianity and Islam at the University of Birmingham, 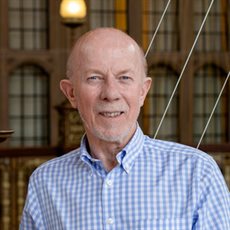 ©
studied similar arguments cited here and the western approach in dealing with them and conclude:

"Precisely what Muḥammad knew about Christianity and its teachings remains unclear. ... a Christian presence in the Ḥijāz and his native Mecca is less easy to identify. … It is the same with the Qurʾān.
The fact that it has within it a great deal of detailed information about Christians, including monks and priests, and their beliefs about the Trinity, Incarnation and person of Jesus is undeniable.
And it seems just as clear that it assumes an advanced degree of knowledge of Abraham, Moses and other biblical figures, about whom it tends to comment rather than narrate, as though contributing to an ongoing conversation concerning the meaning and importance of their deeds and words.
But exactly how this relates to contemporary Christian beliefs, doctrines and teachings has long been the object of investigations that have so far not yielded much that lies beyond dispute." (David Thomas et al (eds), Christian-Muslim Relations: A Bibliographical History, Volume 1 (600-900), LEIDEN, BOSTON (2009), pp. 2-3)

Sources of the alleged teachings for the Qur'anic historical, religious and cultural references, cannot be found in places where the Qur'an was revealed nor where the Prophet (saw) lived or visited. The Qur'an can only have arisen from somewhere beyond human capability.