(60.9k points):
Islamic researcher, graduated from Al-Azhar University, Islamic Studies in the English language. I also studied at Temple University in the US.
3 Helpful
0 Unhelpful
In a Nutshell:
The significance of this verse was the initiation of the second phase of the Messenger's(saw) dawa, i.e., the public dawa to Quraysh's followers conducted by the Messenger (saw) along with his companions. The first phase had seen the Messenger (saw) invite the Quraysh leadership to a new way of life which they collectively rejected.

The Meaning of Fasda (Openly Proclaim)

The word "fasda" express a number of meanings. Allah does not say fajhar (call publicly) or fa-andhir (warn), instead uses a new term referring to a new act. A new term that compromises these meanings along with other elements elaborated by linguists and mufassirun (commentators).

This term intended "publicly doing things in a manner that willingly breaks a certain thing and separates its parts", akin to a strong shining light immediately breaking the overwhelming darkness.

Scholars in dealing with this term present variant meanings, all of which could be right when put together.

For example, some scholars stated the term meant to go public, which is true, but is not restricted to this meaning alone. Ibn Abbas (ra) said it meant:

The same meaning was argued by other scholars such as the fifth century mufassir al-Wahidi who said:

َأَظْهِرْ مَا تُؤْمَرٌ واجْهَر بِأَمْرِك
"Show what you have been commanded and go publicly with your matter." (Wahidi, Tafseer al-Kitab al-Azeez, Vol. 3, p. 53)

But in what manner this jahr (public appearance) was to be done was clarified by other linguists who agreed on the above term and expanded the meaning.

For example, the sixth-century mufassir and linguist Sama'ani said the word fasda came from sada'a which means to publicly appear (dhuhur) in a manner similar to the spread of morning light. So, it is not only to do something in the public, but also to spread it in such manner.

This helps explain the manner or means, but not the outcome i.e., what is the purpose of this public dawa.

To answer this, it is worth considering the word fasda linguistically suggests breaking the solidarity, power and strength of a given subject by dividing its parts.

For example, the six-century mufassir, jurist and linguist ibn Attiyah, and mufassir al-Alusi added imagery of the breaking of a bottle of glass.

This meaning of separation, division and breaking apart was confirmed by Sibaway, the leading grammarian of Basra and the author of the seminal encyclopaedic grammar of Arabic.

So, when this term is to be applied upon people, it would mean divide their strengths and separate them from one another. It also means making them lose their power; confusing their words and convictions. (Razi, Mafatih al-Ghayb, Vol. 19, p. 164)

In the context of the Messenger (saw) was doing public dawa (contrary to the notion of secret stage), this word orders him to do dawa publicly in a way that will establish such a goal. The Messenger (saw) focused his call on the elites of Quraysh, leaders and people of power (shawkah) and protection (man'ah), as they had the ability to reorganise society. However, they collectively rejected, mocked and tortured him.

Then, Allah asked his Messenger (saw) to initiate a new stage of dawa; i.e. turn away and care not about this group of people and declare the message to their followers and separating the followers from the elites to gain the body politic, collective sentiment, and their public opinion (the actual body or substance of the political community) in the case if they collectively agree with what he brings, could force their leaders to change direction. 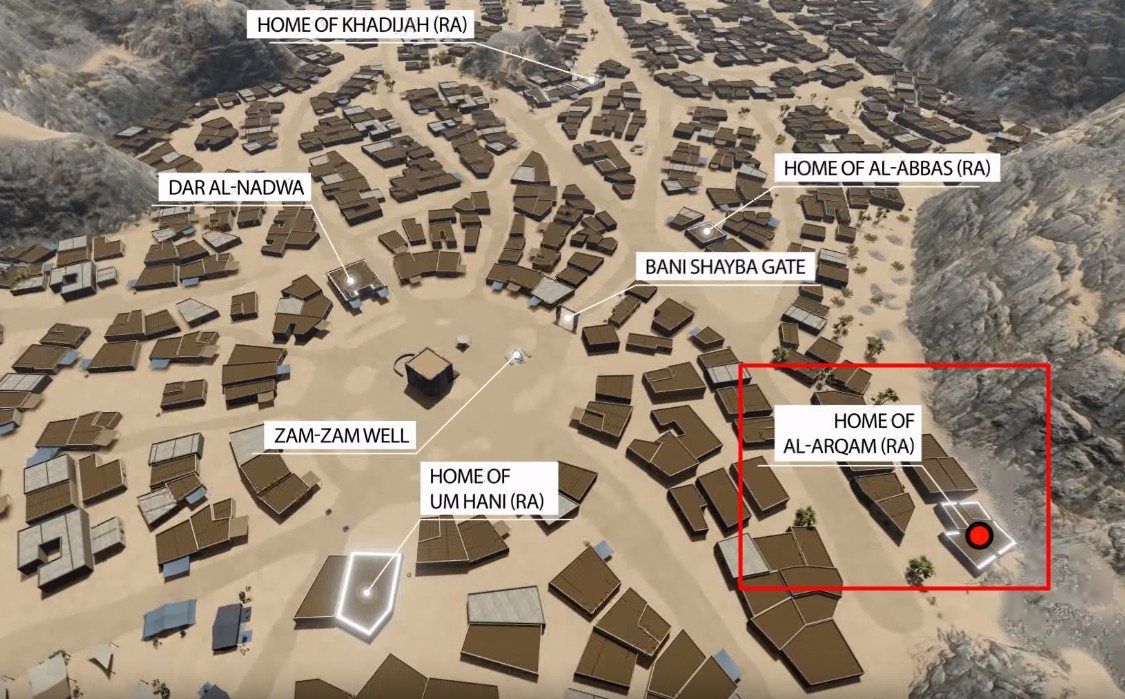 ©
It seems to suggest a shocking society by collective public dawa should involve collaborators, for that reason he needed others with him; the companions he was acculturating in Dar al-Arqam.

For that reason, every narration describes what happens after this verse was revealed states the Messenger (saw) went out with his companions. So, it was not an individual effort any more. (Tastalani, al-Mawahib al-Ludaniyah, Vol. 1, p. 134)

At this point, the leaders would have no power as their power rested in their followers and so leaders would be forced to accept the new trajectory as they did later with fath Makkah (opening of Mecca).

This understanding can be seen in the implication of the Messenger (saw) after the revelation of this verse. The Messenger (saw) gathered the companions (ra) into two rows and did public tawaf, public and collective dawa shocking Quraysh and the society.

This meaning was also explicitly confirmed by the second-century leading linguist ibn al-Arabi, that was approved by the seventh century mufassir and jurist Imam Qurtubi, and the jurist and mufassir Shawkani, who said:

The Meaning of Ma Tu'mar (What you have been commanded)

The second piece in this verse clarifies the means the Messenger (saw) was to use when undertaking this step. This word refers to anything he was commanded to do.

All the above meanings could be valid, but the purport of this verse is best understood in light of the context. What is more probable is Allah refers to something that has been explicitly revealed to the Messenger (saw) outside of the Qur'anic text and implicitly in the text through the word fasda as clarified above and asked him to fulfil it.

The implementation of Allah's order by the Messenger (saw) must be the clue in our understanding. Given the Prophet (saw) went out undertaking public and collective dawa with his companions, it means this is the act meant implicitly in the text.

This understanding of the order being referring to dawa was also stated by al-Wahidi who noted:

Matridi also suggested this meaning and said he asks him to do tableegh of his Message. He said:

So, Allah ordered the Messenger (saw) in the Qur'an do establish a certain thing have been commanded to him before. This command can be seen through the performance of the Messenger (saw) afterwards; i.e. initiation of public and collective dawa with his companion in a manner could weaken the power of the leaders of Quraysh in the case of losing their followers and the confusion of their public policy.

The Meaning of Turn Away from the Polytheists

Classical commentators in dealing with this verse suggest two meanings:

The second meaning was more probable: ordering him to turn away from some and approach others so it can't mean abandoning fighting, rather stop paying attention to a certain group (the mocking elite) and focus on their followers.

Imam Qurtubi and others argued:

For a full discussion, see here.

Who were the Mockers?

The mockers were a number of Quraysh elites appointed from among themselves. Historians disagree on the exact number and names of these leaders, but they all name the elites and people of power in Quraysh. (Razi, Mafatih al-Ghayb, Vol. 19, p. 165)

These leaders must have been the target of the Messenger's dawa, as I mentioned above, and now was the time to turn away from them and focus on their assets i.e., their people.

It was narrated the companions heard of the Roman defeat against the polytheistic Persia and were depressed for the news as the former was still following divine law (even if corrupted) whilst the latter followed a man-made religion. The Meccans were happy, as their likes took over, and mocked the companions. The companions told to Abu Bakr who told the Messenger (saw) of the ongoing debate between the companions and the Meccan polity. The revelation came and informed them Rome would defeat Persia in the second round after a period of 3-9 years:

Abu Bakr went to the Meccans and bet on the coming defeat in this period. This sheds light on the ongoing conversation and debates between not only the Messenger (saw) but also the companions with the Meccan public. (Ibn Kathir, al-Sira al-Nabawiyyah, Vol. 2, p. 90)

A while later, the Messenger (saw) claimed he was travelled during a short period at night to Jerusalem and then was taken up to heaven in what is known as al-Israa wa al-Mi'raj. Abu Jahl heard the news and told the Messenger (saw) to invite the masses and tell them the story, willing they will mock him:

So, the masses are now involved deeply in the discussion in a way that made Abu Jahl search for any critique against the Messenger (saw). But after a long discussion, detecting the truth of the claim, a number from the masses converted, as narrated by ibn Kathir. (Ibid, Vol. 2, p. 104)

So, the masses were increasingly involved in the discussion with the Messenger (saw) and his companions (ra).

The Messenger (saw) even started to have halaqas (religious sessions) around the ka'ba and the companions - even the weak - used to meet the Messenger (saw) publicly and even sit in these halaqas. As it was narrated:

This is interesting, as it shows how Islam looked like in this period where the Messenger (saw) was having openly visible public religious gatherings.

There were also meetings and discussions by the mushrikeen with the Messenger (saw) and the companions as well. It was narrated they used to sit together in the haram (sanctuary around the Ka'bah) probably (or certainly) discussing the inter-religious issues and the mushrikeen used to insult the Messenger (saw), the Qur'an and Allah. (Tabari, Vol. 11, p. 437-440, Wahidi, al-Waseet, Vol. 2, p. 285, Razi, Mafatih al-Ghayb, Vol. 13, p. 22)

So, Allah ordered them to abandon their meetings as long as they kept insulting:

The companions even objected out of their love to the haram:

From the above, the engagement of the companions in the dawa with the Meccans is evident as well as the spread of its teachings by holding sessions in front of the Ka'bah.

When was this Decision Taken?

This act took place in the six-year of ba'thah when the first step of calling the leaders failed, so the Messenger (saw) was ordered to focus on their followers who comprised their support base and power.