Scholars define the Makki (Meccan) and Madani (Medinan) surahs with one of three definitions:

The latter definition is more accurate and soundly accepted by most of the classical scholars of Ulum al-Qur'an. (Ibid)

There is a very hot debate over the Makki and Madani surahs because they were not identified by the Prophet (saw), rather they are based on a large number of often contradicting (weak and sound) narrations as well as the ijtihad of scholars identifying them. They also disagree based on their definition of each term, as clarified above, as well as the elements and characteristics they suggest help identify which surah belongs to which category.

In many of the surahs, there are one or more verses that belong to the other category, i.e., Meccan surahs may contain Medinan verses and vice versa; however the identification discussed here is for the overall and the main nature of the surah. They were organised in a poem by the six-century mufassir Abu al-Hasan al-Hassar and used and authorised by later scholars. (Suyuti, al-Itqan, Vol. 1, pp. 44-45)

There are twenty surahs mostly agreed upon by scholars based on narrations of companions, tabi'een and later narrators. These twenty surahs are the following:

Most scholars disagree on 12 surahs, I will here do my best, based mostly on the works done by the scholar ibn Ashur to evaluate these surahs identifying which surah could more likely belong to which category. But bear in mind, any surah could have one or more verses from the other category, but the rule here is for the overall nature.

It is more likely a Makki surah as it was a part of prayers that was initiated in the first year of ba'thah. This is the opinion of the majority of scholars, as ibn Ashur reported:

It is also more likely a Makki surah with some Madani verses (such as verse 43), because the overall structure of the surah is highly similar to the Makki surahs. It is also a Makki surah as reported in sound narrations on the authority of ibn Abbas, Mujahid, Abu Talahah, Qatadah, Sa'id ibn Jubayr and others. The reason behind their disagreement here is generally because of weak and fabricated narrations. (Ibid, Vol. 13, p. 76)

It is also a Makki surah according to the opinion of the majority of companions and Tabi'een as well as the vast sound narrations documented its cause of revelation. Ibn Ashur noted:

It is an overall Madani surah contains a number of Makki verses as supported by the structure of the surah and some other narrations, as also noted by ibn Attiyah and ibn Ashur:

One can't decide exactly where it was revealed, there are two narrations of ibn Abbas (ra) support both categories. Others, such as al-Waqidi, noted it was revealed in Medina after the legislation of fasting urging Muslims to pray the prayer in the day of al-Qadr. I personally find the latter argument and the context of the surah (that speaks to a believing community) could give weight to the Medinan notion. (Ibn Ashur, Vol. 30, p. 455, Ibn Attiyah, Vol. 5, p. 504)

The context of the surah also shows it discusses some issues with the people of the book (Ahl al-Kitab) which is one of the characteristics of Madani surahs. (Ibid)

The majority of the companions, such as ibn Abbas and ibn Mas'ood, and other tabi'een, such as Mujahid, Ataa and Dahaq, report it is a Makki surah. But Qatadah, Muqatil, ibn Attiyah argued it, or only the last verse, is a Madani surah based on a very weak narration. (Ibid)

There are narrations report the Messenger (saw) was asked by either a group of Quraysh in Mecca or a group of rabbis in Medina to describe his God, so the surah was revealed.

Some scholars such as Suyuti argued it was revealed twice, but if it was revealed in Mecca it would be only used in the discussion in Medina i.e. a usage of the surah not a new revelation that the narrator thought it was the first time to be revealed. (Ibn Ashur, Vol. 30, p. 611; Ibn Attiyah, Vol. 5, p. 536)

The surahs were used as purifying verses against any type of evil in the world. There are also two narrations. Some reports note it was revealed after the Prophet (saw) was harmed by a magician (Lubayd ibn al-A'sam) in Medina and some more reliable narrations of ibn Abbas (ra) report Quraysh wanted to harm the Prophet (saw) by evil eyes and the surahs were revealed to protect him.

Thus, the Madani surahs from these disputed surahs are more likely:

but the Makki surahs from them are

The Makki surahs are the rest 82 surahs in addition to the above Makki surah evaluated from the disputed ones resulting in 89 surahs.

This is summarised in the table below: 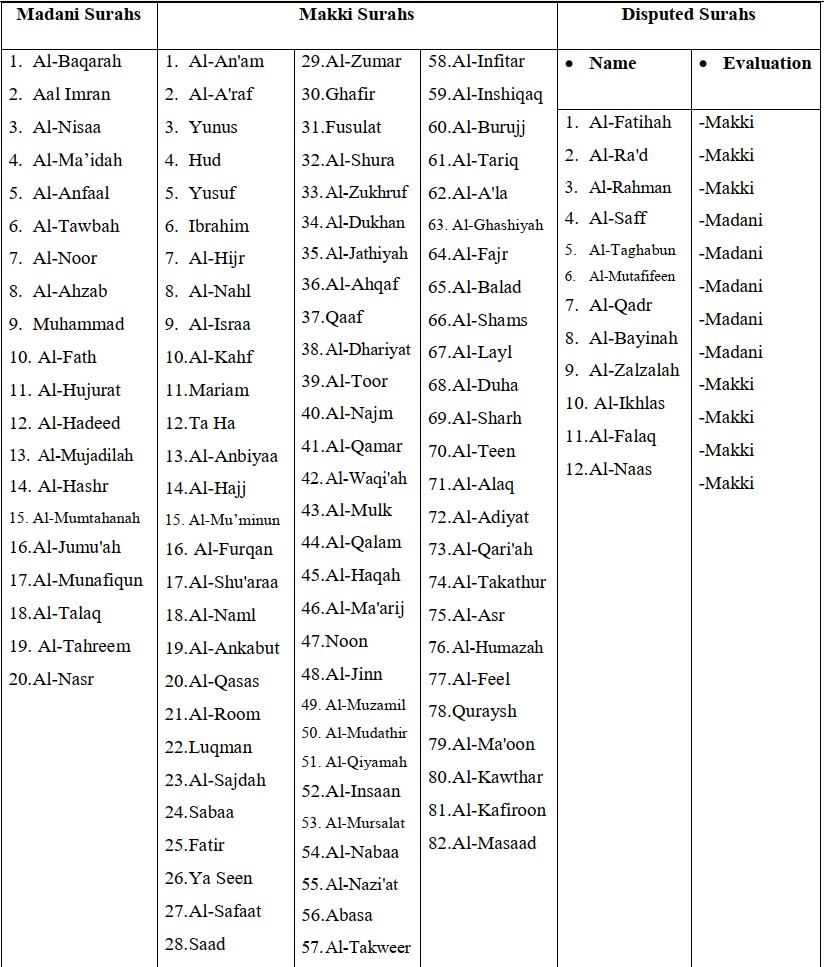